Roberto woke up and got a phone call from one of the members in the powerhouse to invite him to join the club. Even though that meant the Roberto had to be friends with Lexi’s ex-boyfriend he said yes. Roberto went to the club gathering they were having at the gym in Windenburg.

Lexi was invited to lunch by Alice and she took the boys with her. They went to the restaurant Little Italy. Dylan was the one that requested the table for the group. The waiter put them in the back where the garbage was and where the waiters took their breaks. They were not happy at all where they were sat but they dealt with it. They twins at least got to talk to their “Aunt” Alice. 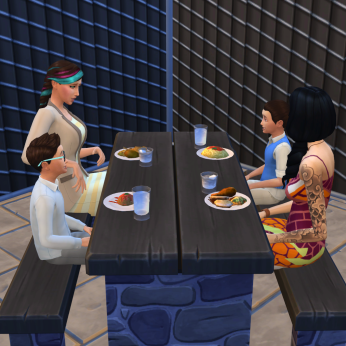 When they got home it was pretty late. Drew and Dylan woke up in the middle of the night to a monster under Drew’s bed. Drew tried to talk to it but it didn’t work. Dylan got his parents to spray the monster and make it go away. After the monster went away they slept for another 3 hours and had to wake up for their first day of school. 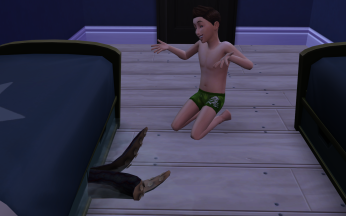 Lexi has decided that instead of selling all her paintings she will save them to start a store in Magnolia Promenade. For lunch, Lexi made Fish Tacos for the boys since they came home from school starving. While Lexi cooked the twins took the first day of school selfie. Drew was bored so he played with the doll in the toy house. Dylan did his homework while he was talking to his mom.