The leaves are turning colors and painting the landscape with bright vibrant colors. As the air turns to chill, writers have only one things on their mind. No, it’s not how much candy they can get this Halloween! November is only two more weeks away and that means the annual NaNoWriMo event will be underway at the start of the month.

As you may or may not have suspected, NaNoWriMo is the abbreviated title for National Novel Writing Month. In November, writers will sit down at their computers, typewriters, and with their notebooks to start on their yearly submissions. By joining the online community and taking part in events at local bookstores, the worldwide initiative encourages people to find their creative outlet through the written word.

NaNoWriMo.org first started the annual event as early as 1999 but didn’t become an international non-profit organization until 2005. Since then, it has accrued over 400,000 participants and received funding through the Amazon Literary Partnership program. It hosts webinars, community forums, and pep talks to encourage each of the writers to reach their word count goals.

Your Novel, Your Way

You might be asking yourself, “But what does this have to do with The Sims?”. SimLit writers are some of the most creative individuals.Thanks to the popular video games from Maxis Studios, some have even found their niche in writing that they would have never discovered were it not for writing a simple legacy.

NaNoWriMo doesn’t have a specific genre restriction. You can write romance, horror, comedy, or a little bit of everything. You could even use some of your old writings and re-write it for the event. (Although, NaNoWriMo encourages you to start with a blank slate.) This is your novel, you rule! If you want to write 50,000 words about your Sims not being able to climb out of the pool, then by all means, have at it. Make sure to bring the popcorn. 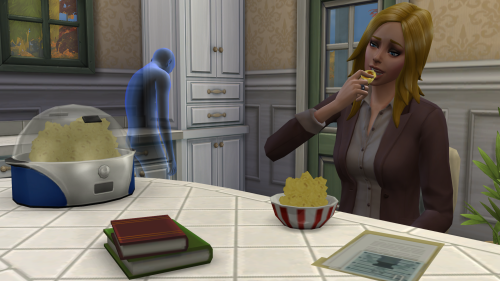 Writing a novel is an exhilarating and tiring undertaking with little reward beyond the sense of accomplishment. Even writers that do so for career can admit that selling a manuscript is the hardest part of the gig. Similarly for SimLit writers, the well of creative ideas is never-ending.

There aren’t any rules that determine what your novel can be about. Even the 50,000 word count is adjustable depending on your availability. Sure, you might not get the fancy little print out saying you completed your NaNoWriMo novel. But you’ll get much more than that: Pride. And hey, if you do get up to the word count goal, then you can quality for prizes!

What happens after NaNoWriMo?

Once you’ve got a sweet looking certificate framed above your mantle, you might wonder what to do next. In the months after the event, many writers take the time to polish their masterpieces.Some even submit their novels to publishers. NaNoWriMo has been the start of many published writers such as Cinder by Marissa Meyer and The Night Circus by Erin Morgenstern. There’s a whole list of them in fact. Of course, there isn’t any pressure to publish and sometimes just booting up The Sims will be reward enough for a month of hard work.

Anxious to get started? Check out the NaNoWriMo website and make an account. On the Dashboard, you can already set a title and synopsis for your new novel. Prep time before diving into writing is almost as important as the outcome itself. But don’t start until that clock ticks midnight on the 31st or gnomes will steal it while you sleep.