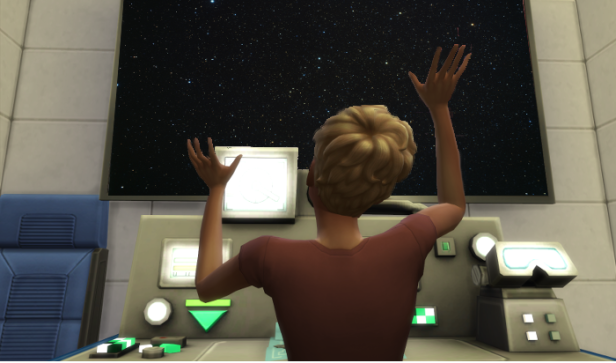 Lost in a never-ending galaxy, Amelia felt mocked by the twinkling stars around her. She had been drifting through space for what felt like an eternity with no idea as to what to do next. After leaving the planet that she once cared dearly about and having everyone she knew snatched away from her, Amelia was left on her own once again. Isolated. Lost. Looking for comfort. Now she was lying in bed still until she was startled by a loud buzzing sound. Being the curious Sim she was she quickly went to investigate. What happens next? Only one way to find out.

First Impressions: I was curious from the start. How did Amelia get to where she was? What happened to everyone she knew? Where is her family? I have so many unanswered questions! The story had me on the edge of my seat hoping that nothing bad would happen to Amelia but then the ending came and now I just want to know what happens next without giving too much of the story away. A lovely story which is beautifully written definitely worth taking the time to read.

Welcome Back was part of the November 2015 Short Story Writing Challenge with the theme for the month being Lost.